It’s my senior year of college: a time of stress, anxiety, and quarter-life crises. Or at least that’s what’s supposed to happen. Personally I feel quite at ease not knowing what will happen come May 14th. When I tell people I’m studying language in school, I get a lot of confusion or even negativity. “What are you gonna do with that? Be a Spanish teacher?” “Was it your backup plan?” “Language and what?” “So you’re going to grad school then, right?” My question for them is, “What am I NOT going to do with it?” What I have learned in the past four years affects the way I think and speak every moment of every day. You cannot live in isolation from anything you’ve ever learned or experienced – your mind is a constantly morphing blend of everything that’s been added to it – new languages being no exception. There’s no such thing as useless knowledge. But I digress.

I don’t feel the need to justify my future career path (or lack thereof) to these strangely concerned people. But I do feel the need to justify language and its wondrous complexities. Think about this: just within English, how many dialectal variations can you think of? You’re kidding yourself if you think my 90-year-old grandfather could understand the language of the average high school Hoosier (bae? fleek? hunnit? nope) – and that’s within one solitary state. Think of the accents, idioms, cultural references, and inflections icing the cake that is the English language. If you met someone from Northern England, chances are you’ll ask them to repeat themselves 17 times in 5 minutes. Same goes for any language: a person from Spain will have a tough time understanding someone from Mexico, Argentina, or even a different region of Spain. Taking it a step further, language in the exact same location varies with time. Ever read an abridged version of an old book? That means the exact same language had changed so much over time that a translation from English into English was necessary for comprehension. Language is so diverse.

These are things we’ve always known but never think about, unless, of course, you experience something that forces you to think about it. For me, it happened when I decided to embark on a semester abroad in Salamanca, Spain. I had never left the country, I had never been on a plane, and my Spanish was less than mediocre. So, me, being the badass 18-year-old taker-of-risks that I was, jetsetted to Europe for a few months that would change my life.

Being surrounded by a language you aren’t fluent in is like being on another planet. Suddenly you’re the foreigner, you’re the alien, you’re the annoying tourist who can’t order food or purchase train tickets in the mother tongue. But the process of immersion happens shockingly quickly, and, before you know it, you’re feeling more like a local than a foreigner.

I could talk about Spain until the cows come home but let’s fast-forward a year. Back in Indy, I had changed my major to Spanish and International Studies, began earning a Certificate in Translation and Interpretation Studies, switched my iPhone to Spanish, started listening to Spanish music – I couldn’t get enough. The acquisition of a new language is nothing short of astounding. It opens your mind to a massive alternative system of expressing thought. (We’ll come back to this.) Little mental phenomena remind me of its power. The first of these phenomena was the first time I dreamt in fluent Spanish. Somewhere in my mind I had stored enough knowledge of the language for the little director of dreams to put on a show en total español. How dope is that? The next phenomenon was when I was reading a Spanish text and realized I was no longer mentally translating the text, but rather, actually reading in Spanish, thinking in Spanish, synthesizing in Spanish. The language had made itself a home in my mind and did not depend in any way on my knowledge of English. It was functioning as its own totally independent apparatus.

Back to this idea of expressing thought – how tall of an order is that?! Our thoughts, our abstract ideas, our opinions and our creative inspirations, are confined to words produced by other humans long before we were born. How often do you say things like, “I’m at a loss for words,” “I don’t know how to put it into words,” “Words don’t do it justice,” etc.? Even further, they are confined to social conventions put in place by our culture. For example, say you run into an old friend in a bar. A million thoughts scatter to assemble themselves in your mind, but what do you say? You more than likely will select one out of a small handful of greetings deemed appropriate for the situation by society: “Hey!” “What’s up?” “I haven’t seen you in forever!” “How’ve you been?” It’s convenient, it’s mundane, and it’s somehow still brilliant.

Words get by with a little help from their friends, though. Their best pals include body language, tone of voice, and eye contact. That abstract thought in your head is a little better expressed with an eye roll, a longing gaze, an excess of blinking, or an eyebrow raise… Of course, even those tiny gestures can and do get lost along their journey from one mind to the next. Nonetheless, you have to admit that sometimes the mystery makes communication that much more fun.

In the end, language is all we have. But aren’t you glad we do? 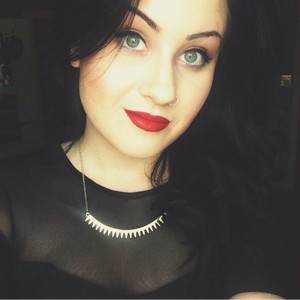 Meagan Gardner
Meag Gardner is an adventure-seeking gypsy from the eastside of Indianapolis. She'll graduate from Indiana University Purdue University Indianapolis in May and plans to teach English in Spain upon graduation. In her free time, you can find Meag kickboxing, reading, and making feeble attempts at playing guitar.

There Are No Strangers in this World, Just Friends Who Haven’t Met
November 20, 2014
Recent Posts
Submit Your Own Props
Learn about becoming a guest blogger. No writing experience necessary. Everyone has something to be grateful for.
Categories
Go to Top
CyberProps