Props: A Ledge and a View.

I want to preface this post with the information that I’m 5 beers deep and I’m not certain I have sobered up from last night. That’s your fair warning.

There’s a lot of people that deserve props in my life. But I’m not going that direction. The place I want to give a shout out to is an eight foot concrete slab in Bloomington, Indiana behind Woodburn Hall. I’ll start where all good stories start; the middle.

I woke up around 5:30 am on a hot August morning in 2012 wondering what had happened the night before. I was outside, on a ledge, and I’m certain the last shot of Patron was the reason. Why did I wake up here? Why didn’t I walk home? In time I realized why I felt such solace and comfort on this dumb piece of slab. My first day at Indiana University I had zero idea how to get to my first class. So I sat on this ledge and smoked a few heaters contemplating asking someone where to go and living with the shame of being “that guy”. I sat on the ledge for 3 hours contemplating and decided to go home. For the next few weeks, I kept going back to the ledge to adjust to college life and figure my shit out. Four years later I had awoken on that very ledge. People say home is where the heart is, and I guess this was my home. I swear I’m not homeless.

A lot of things transpired in college that crushed me. My father had his second heart attack in a year, my grandmother died, and I was diagnosed with severe anxiety disorder. Every time I felt like I needed a place to figure shit out, I went back to that ledge. It looks out on a meadow and art students often do sketches there so they can vindicate that they pay for an art degree. I’m not a nature guy. I hate hiking and I don’t think trees are that interesting. But this place always takes my breath away. In the fall the leaves turn, in winter the snow covers those same trees. It comes full circle when the trees bloom again. As dumb as it sounds, I grew up on this ledge. The one night I can fully explain its importance happened in June of 2010. My girlfriend who I had been dating for two years called it quits. I was lost. I walked twenty minutes in pouring rain to the ledge. I sat and thought about everything that had transpired. There is no place in the world I could have realized clarity more than that stupid piece of concrete. There I was, heart broken and soaked crying my eyes out like a complete sally. A maintenance man came out from Woodburn Hall and asked what I was doing. He told me to come inside out of the rain. We talked for about two hours about life and relationships. He gave me his chip for being one year sober from Alcoholics Anonymous to remind me that I was far from rock bottom. I never learned his name, but that chip is currently in my dresser. I’ll never lose that thing.

So what is the point of this post? There are people who come in and out of your life. Some good, some not. But you need a place where you gather your shit. You need a place that your blackout-drunk mind heads when you don’t know where to go. My place is a ledge that hipsters smoker American Spirits on. I’ll never fully understand why.

Two months ago I was let go from from my job. It was about 7:30 at night when I decided to drive to Bloomington. I parked and went to that ledge. Instantly I felt confident things were going to work out. They worked out when I almost lost my dad, they worked out when I lost a person I loved, and it worked out that time.

We need our place. Our joint that reminds us where we were and how far we have gone. I went from an 18 year old to a 25 year old on that ledge. Every single problem, worry, or joy happened there. Some may find it strange, some may find it stranger. But that is my spot and it will be for the rest of my life. As we age we see nature literally aging with us as seasons go by. I am forever grateful for that stupid ass ledge.
Also one time I saw two hippies make whoopie on it, So there’s that.  I’m writing this blog on that very ledge. The sun is blinding my eyes because I forgot my funglasses. I hope you all enjoyed that romantic comedy starring Hugh Grant and a ledge. My name is Richard Howenstein reminding you that heroes get remembered, but ledges never die. 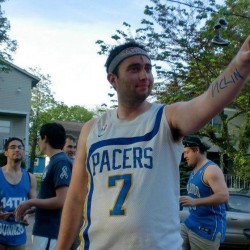