Props to minimalism: I fell in love with minimalism when I was in school studying to be a designer. Now I live in a 400 square foot apartment in Korea. In design, I love things that maintain simplicity in their geometry, shape, material, and color. Things seem truer and purer this way. The challenge, the real sticky wicket of designing something to look like this, is that every detail becomes glaringly important to an item’s function. Everything on that product or thing has to have meaning. What good is a product that doesn’t do its job—even if it does look cool? After I finished school and began my professional life, I realized that this could be more than a design principle. I began reading about minimalism as a lifestyle. I was completely taken with one book in particular, called Everything That Remains. It is a memoir of two guys from Cincinnati who realize that they are unhappy in spite of their wealth and success. They find a path to simplicity, happiness, and meaningfulness through minimalism.

We’ve all heard of minimalism as a lifestyle. I had always admired this idea, but it seemed so unpractical. When I thought of minimalism, I thought of Thoreau in a high school English class with Mr. Kubacki. I thought I could only be a minimalist if I ditched my computer, picked a couple outfits to wear forever, only drank whiskey, and generally deprived myself of frivolous luxuries, like deodorant. It was through Everything That Remains that I realized there could be different flavors of minimalism.

This book made me realize that minimalism isn’t about self-denial. Rather, minimalism is a tool by which one can achieve clarity, meaning, and happiness in their lives. The point is not to have less, but rather to only have things that truly mean something to you. The idea is to define minimalism for yourself, to examine your life and trim (or, ideally, avoid) the excess. Minimalism should be different for everyone, because different things are important to everyone. The process of trimming the excess began, for me, by looking at my closet. I had been toting around boxes of clothes (many that I never wore) from dorm room to apartment to duplex for five years. I probably only ever wore about 60% of the clothes. So I gave the majority of my clothes to cousins or donated them. I kept only what I wore on a regular basis, and a couple fun or sentimental pieces. At the end of my purging process, I had about 70 items in my wardrobe. I did the same with my belongings. Many books, hoards of spare bicycle parts, year-old receipts, and trinkets alike were disposed of via goodwill or Craigslist. I even packed up all but a couple plates, glasses, and bowls.

It was like a drug. It reiterated why minimalist design appealed to me. Every detail began to have more meaning and be more important. What’s more, there was less clutter. I had to do dishes every night, but the sink never got full or dirty. I had to do laundry far more often, but as a result, my room was never blanketed in the familiar carpeting of t-shirts and discarded socks. With my new philosophy, it became very easy to save money. I was able to eat out more and enjoy the experience of a shared meal or drink with friends more often. Even those relationships began to hold more meaning. With less clutter in my life I was able to realize what was important to me. By having less, I had more freedom to act on these things.

I began to ask qualifying questions about almost everything that I was doing: What meaning does this add to my life? Is this what I want to be doing? The answers did not need to be as profound as the questions themselves might seem, but it helped to honestly think about my choices. I asked these questions of my job. After college, I was lucky enough to land a job at a groovy little studio in Indianapolis called Luur Studio. Incidentally, they’ve recently been one of 25 firms to be put on Sight Unseen’s America’s Design Hot-list, so check out Luur Studio on Facebook and Luur_studio on Instagram. Enough of the shameless plugging, Cy.

Anyways, at Luur I was able to be part of amazing projects and I learned an incredible amount. I loved working there, but there was always something missing. I realized that what is really important to me about the design process is the user. I want to be able to learn about and connect with the people for whom I am designing. I want to be a part of the design process that focuses on people, not a bottom line. The clients that we were working with did not have the same view, and I was designing things that were just adding clutter to consumers’ lives—the very thing that I was trying to avoid in my own. I didn’t believe in the work.

I was on the correct career path. I had my design job at a start up firm with a year of experience. I was supposed to be doing this. I walked away, however, because I wanted to do something that added more meaning to my life. In Indy, at that firm, I was missing the part of design that I truly love—the opportunity to learn about the lives of different people and understand the different problems they face. I want to be able to help people. I love the empathy involved in design and I needed to get back to that passion that drove me during my time in college.

My girlfriend, originally from Colorado, was teaching English in France at the time, and we had been trying to figure out how to be together when she was finished with her contract. She suggested that we apply for teaching jobs in Korea. I saw that this would not only be a way for us to be together, but also a way for me to immerse myself in another culture and embrace that idea of empathetic learning that I was missing. Minimalism made this a viable option for me because my belongings no longer owned me, I had fewer financial worries, and was free to pursue meaningful experiences in my life. Now, six months later, I’m writing this post from a park bench in Seoul before work.

Because of minimalism I am freer to be happy and to follow my own path. It is not always easy, and sometimes I catch myself wondering why I got rid of that Edgerrin James jersey, or what the hell I was thinking moving to the opposite side of the planet. Isn’t that the whole reason that I’m here, though? I came to learn, to experience, and gain something. I came to understand the way different people live. I came to uncover a better understanding of what I wanted my life as a designer to mean. Minimalism is a way for me to experience more, be less distracted, have more freedom, and live a happier, more meaningful life. Hopefully. It’s a process, and so it goes. 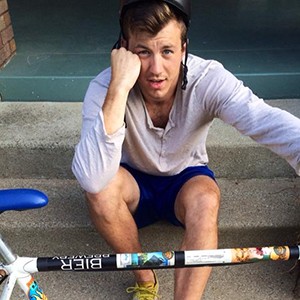 Cy Bennett
Cy is currently an English teacher just outside of Seoul, South Korea. Cy is originally from Indianapolis and studied industrial design at the University of Notre Dame. He worked briefly as a designer at a small firm in his hometown, but changed his career path in an effort to pursue a design career that focused more on people. We’ll let you know how that goes…