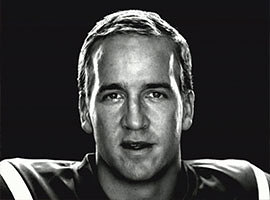 Our Peyton who art in Denver, hallowed be thy name. Thy passes come, thy will be done, on Earth as it was in Indy. Give us this day our daily touchdowns, and forgive us our trespasses, as we forgive Irsay for trespassing against you. Lead us all into amazement and deliver us from Brady… Amen.

Ladies and Gentlemen, members of the congregation; today I read to you from the Gospel according to Peyton.

As a young man, Peyton was crowned the Messiah of football. Though he accepted this heavy burden, it was not without its trials and tribulations. The world expected of him many things, not the least of which being the forgone conclusion that he would follow in the footsteps of his father. Peyton was to attend Ole Miss and continue his work spreading the word of Manning from city to city, performing his miracles for all to watch. But Peyton, accepting the full burden that is being the Messiah, chose to forge his own path. This path he chose led him to Tennessee. He chose to defy the destiny everyone else had laid out for him in order to forge his own; becoming his own man, his own quarterback, his own Legend.

While at Tennessee, Peyton began to spread the good news.Preaching the Kingdom of Manning on the gridiron every Saturday. When he set foot onto that field, and settled in between those hash marks, he became more than a man, more than simply the son of Archie… He became a God.

In the few short years Peyton spent in the deserts of Tennessee, he led his people to an SEC Championship, and continued to bless the people of the South with many a miracle. These miracles would eventually take him North to the treacherous climate and environment of a land called Indianapolis where he would practice the faith on the Holy Day of Sunday from then on. His path may have led him North, but this did not come without those who doubted his Holiness. You see, there was a false idol wandering the lands of the West. This devilish traitor to the faith went by the name of Leaf. Leaf would lead many an innocent person astray from the works and words of The One True Father: Peyton. These same poor souls were quick to find out that this horrid man by the Name of Leaf was a blasphemer, and was destined to burn in the bowels of Hades itself. In the older ages before the merger, these faithless souls would have perished day after day for eternity with the false idol Leaf, but with Peyton came forgiveness. He promised these poor souls the chance to repent and return to the faith. Some of these poor souls would receive forgiveness and return to the faith, but others would choose to wander down a darker path.

As our Lord continued his work in the North, he knew there was more to be done. He began to travel the entire continent, spreading the good word every Sunday and gracing the masses with his miracles: touchdown after touchdown, comeback after comeback, all the while feeding the hungry and football deprived.

With his travels came many a name: P-Money, The Sherriff, MVP. The Sheriff was clocked in, he was in charge, and if you fought the law, the law won. He would continue his work as a Field General without letting the pride turn to hubris and become his downfall, as did so many men before him. No matter how many times he was crowned by the masses as the Most Valuable Player, there were still blasphemers in the world. Many of these blasphemers were those who chose to defy the opportunity for repentance. These blasphemers came accustomed to promoting false deities and faiths, and those who wandered the darker path would follow it East to a mysterious land they called “New England.” Even in light of the knowledge that the “Old England” was full of Red Coated demons and monsters with the Backs of Lobsters, those who chose to take the path of darkness to New England would soon be following the dark arts of the Devil himself; Tom Brady. These blasphemers would eventually receive what they wished and Peyton would fall to a catastrophic neck injury leading him to disappear from the sights of his followers for what felt like ages.

As the time passed we wandered the lands with seemingly no direction. We were lost. Left with nothing but the promise that one day he would soon be back again, saving the people from the dark abyss that was a Peyton-less gridiron.

Through these dark ages many lost the faith. As the light became dimmer and dimmer, many a soul was suffering a diminishing faith in our Good Lord. The day Peyton always knew was coming was finally there; he had to be sacrificed to be born again. Peyton had always known this was his destiny, to be betrayed by the one he trusted the most.

He would sit down and have a last supper with his disciples, to whom he referred to as his “Colts.” He explained to them that for him to be born again and for the word of his Father to be fulfilled, he must be betrayed by one of his Colts. This poor soul went by the name of Irsay. Irsay was always one of Peyton’s most loyal of disciples. Peyton entrusted many responsibilities in him. He delegated much of his work to Irsay, so much so that it was Irsay’s responsibility to manage the other Colts. It was he who was chosen to be the catalyst to the Second Coming.

On that fateful day, Irsay would cut Peyton with the blade of severance. A blade so sharp that all of Peyton’s disciples and followers from the world around would feel the sharp pain in the core of their bowels, ripping them from the inside out, leaving nothing but a crippled soul existent only enough to mourn the departure of the Lord and Savior.

But we were promised. Peyton promised us a comeback, a Resurrection.

On the third day after Irsay’s betrayal, a new disciple arrived on the horizon to give Peyton a new platform to preach his word upon. This disciple, a saint, had spent many years dedicated to preaching the words of the football gods himself. He had built a beautiful church with a long, storied tradition. Built upon the same Pillars of Faith that Peyton had built his following upon, many had even considered this saint’s teachings a faith of their own. This church was in Denver and this saint was John Elway. Elway too was credited with many miracles. The most notable miracle of all being a tale referred to by his followers as “The Drive.” It was this man who would present Peyton with the opportunity to continue his miracles around the world for years to come. Peyton would bring himself and his church back to the mountaintop, back to the Promised Land. His promise: one more Super Bowl Championship.

This has been a reading from the Gospel; according to Peyton. In The Name of the Father, The Horseshoe, and the Holy Peyton… Omaha.

You see, my fellow followers, the Good Lord Peyton promised us a second coming. He warned us not to fret. He was a man of his word. Today, I ask of you, the people of his church, to heed his words.

We all remember the dark times, the struggles we have gone through with and without him. No doubt, we have all second guessed our faith in him from time to time, but I ask of you as he did; keep your faith.

Keep your faith strong in the man who has given you so many memories. So many smiles when you recollect the comebacks. In 2003 when he led his Colts back from 21 down to the defending Super Bowl Champion Buccaneers with less than 4 minutes remaining on the clock. When he finally defeated the Devil Brady in the Duel of the Deities back in 2006; defying all the odds to comeback from a 18 point deficit in the AFC Championship, leading his Indianapolis followers to the Promised Land in Miami.

Think of the smiles these moments put on your face. These are memories that will last forever. Now I cannot deny for every gleeful memory we have, there is an equal number of painful ones. But I beg of you, do not let these dark memories steer you away from the reality that Peyton has always kept us on the precipice of legend.

So to this man, this legend, this God in his own right, I raise a glass in honor; may your record amount of MVPs (5) continue to stack up, your touchdowns (506, 2nd all time) continue to pile up, and your passing yards continue to accumulate. I think I speak for all of our congregation when I say, TO HELL WITH THE HUDDLE!

Props to you Peyton Manning, because without you… We’d probably all be Bears fans… and nobody wants that. 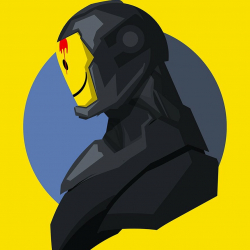