I love playing soccer so much that I’ve been playing it fairly consistently for about twenty years now, even if it is just pick up games in the park more than anything now. As far as exercise routines go, that’s infinitely longer than I’ve ever been able to stick with Zumba, weightlifting, running, yoga, Pilates, squat challenges or any of my other short-lived workout attempts combined. What is it about the game that keeps me coming back for more? Maybe it’s because every game brings a new challenge. Hitting the elliptical at the gym starts to numb my brain after a few times, but soccer offers a mental and a physical workout. Even though you may practice a run or a move, in a game, you are forced to improvise and react on the go. No two games are ever the same, and anticipating that is what puts a little thrill in my stomach every time I step onto a field.

Sure, improving your foot skills or strength takes repetitive work. I’ve spent hours doing wall sit after wall sit to build up quad muscles and done countless planks in foot-high grass with ankle-deep puddles. That’s where another essential aspect of the game comes in: team camaraderie. Like I said before, I don’t stick to just any workout very well; having great friends to play with is 99% of what gets me to show up to play. And soccer friends are some of the greatest people I have been lucky enough to meet. It doesn’t matter where we are or what language we are speaking, if there has been a ball at our feet I can usually look around and say, “These are my kind of people.” Even though I’ve never been a stellar player, soccer has provided me with an avenue to bond with people I might never have met otherwise.

Soccer is so many things to me. It’s the weirdly good smell of a muddy field in spring and the rubbery odor of indoor turf. It’s the fizz of an icy beer in a plastic cup shared after a game. It’s banter on and off the field and knowing all the words to every World Cup theme song. Achy knees, smelly shin guards, early mornings, late nights, believing in each other, challenging each other to be a part of something bigger. It’s so many things, both mundane and awe-inspiring, that add up to a lifelong passion. 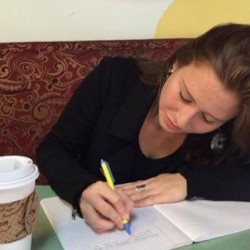 The Stanley Cup Champions
February 27, 2015
Recent Posts
Submit Your Own Props
Learn about becoming a guest blogger. No writing experience necessary. Everyone has something to be grateful for.
Categories
Go to Top
CyberProps