Is there any worse punishment than your 8:30 am train commute to work? No, seriously, is there? I’ve read Dante over and over again, and I still consider Judas a lucky man. At least the ninth layer had central air. Like that last stupid freshman smashing his holier-than-thou attitude through the last call crowd at Kilroys, I sit smashed between two people sweating so much they look like they just came from the splash zone at Sea World.  I am two stops into my Monday ride, and all I ask for is a quiet journey to help dim my hangover from the night before (brunch/endless mimosas lasts till 10:45pm, right?). But alas, the harpies will not shut up. No one cares about Juan Pablo anymore, ladies. The show is over, and you would take the rose too.

Needless to say, it was an abysmal trip. However, after running past the old lady on the sidewalk, the Mayor Emmanuel protester, and the all-too-conveniently closing door to the elevator, I make it to my desk only 7 minutes late! Don’t worry, kids, you round that down in the real world. Forgetting one of my five passwords into my work Windows, I continue to drag myself through this unforgiving Monday, knowing I am only minutes from salvation. Finally, I am able to pull up YouTube and make the 12 keystrokes that make orange Gatorade after brushing your teeth look like purple Gatorade after that morning lift.

Wait. Isn’t he that the radio jockey that interviews Playboy models and has contests on air awarding a new toilet to whatever listener can drop the biggest deuce (the contest is over, bud. The Taco Bell won’t help you)? Well, yes. Stern’s 20-plus years in radio have certainly had their controversial highlights. In fact, he is the most fined radio personality in history, having paid the FCC an absurd 2.5 million dollars. But needless to say, this man has to have staying power for a reason. The self-appointed and universally confirmed “King of All Media” will never lose his throne for one reason: He is simply the best. Why haven’t you heard his broadcasts if he’s so good? Well I’m gonna tell you, smart ass. Stern works for Sirius XM, the station that you can only get in your Dad’s Mercedes, not yours. The reason? Besides being fired from WNBC in New York in 1982, satellite radio is the land of unedited glory. No longer will bi#%h, [email protected]#k, and $*@t have to suffer the unjust masking of the hated bleep. No longer will you wonder, “Does Adam Levine smoke the ganj? Does John Cena have sex with ugly girls? Does Mila Kunis have a Tinder? (you’re still definitely a swipe left, though). Stern gets down to it. His legendary combination of unmatched intuition and relentlessness guarantees the best interview from every celebrity, every time.

The reason I love the King so much, though? Along with his notorious bravado comes an equally legendary ability to psychoanalyze his guests and truly get the answers the listening public and the guests themselves never thought they would hear. Stern’s rough upbringing in Jackson Heights, New York helps him to identify with, communicate, and understand guests like Jay-Z, The Game, Pitbull, Eminem, LeBron James, Queen Latifah, Danny Trejo and Floyd Mayweather, who undoubtedly would never be nearly as candid with someone like Barbara Walters or Larry King. Additionally, his 500 million dollar deal with Sirius XM puts Howard in the glitterati elite, being able to sit side-by-side and discuss movies, politics, television, and comedy with the likes of James Franco, Anderson Cooper, Paul McCartney, Kim Kardashian, Rob Lowe, Chris Rock, Kerry Washington, Adam Sandler, Joseph Gordon-Levitt, and Whoopi Goldberg. No other person, on radio or off, has that kind of A-list resume. Plus, his interviews are virtually all an hour to an hour and a half long, so he is able to discuss aspects of his guests’ lives that normally would not make the cut in a standard 8 minute television spot. Finally, since the interview medium is radio, you don’t have to worry about missing any visual shenanigans. You can just minimize the screen and get back Facebo… your job.

Words cannot describe how Howard Stern acts as my workplace savior. Not even right clicking and “synonym”-ing the word savior gives justice to how this man has changed my work days. Knowing that I can segment my day into 8 blissful Howard interviews on YouTube instead of 8 (million) hours next to a ginger puts a smile on my face. So gigantic props to you, Howard Stern, the internet’s best kept secret. Now go, ye readers! For we all have unbearable white girls in our lives, but with Stern, you now have hope for Tuesday. 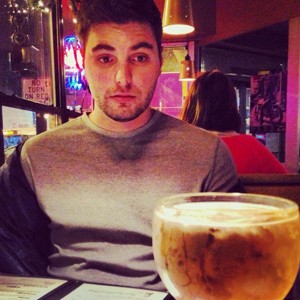 Nick Tsangaris
Nick is a Chicago actor and Beyonce's actual first child. He enjoys ruining his ab workouts and knew Durant was better than Oden from the jump. He's sassier than you, and you love it.