I really like the idea of creating a culture of recognition. I feel as if our culture thrives on entitlement, for things we have yet to earn. CyberProps seems to be a positive step to creating a society based on appreciation, and gratitude. I wish to extend my gratitude and give props to my father Dan Larson. He has always been a source of inspiration for me, and I have always looked up to him. He was and is the kind of you man you could count on for pretty much anything, whether it be something odd like driving over to fix your garbage disposal or plowing your driveway when it snowed. He has always gone above and beyond to help those around him.  He is also an extremely good teacher… and that’s where I come in.

Rewind to the Bizarre

Ever since I was young, my dad loved to entertain us kids. Probably one of my favorite memories of my childhood is when my dad would take me out into the driveway and throw me on top of his shoulders. He’d pull out his unicycle and a couple pieces of fruit, usually apples. Then, he’d take me for rides up and down the driveway with me on his shoulders.  If you have ever ridden a unicycle, you would know how vulnerable you feel when the only thing keeping you from falling straight on your face is your acute balance and concentration. And… as if the situation couldn’t get any more precarious, try doing that with someone on your shoulders.

Sitting almost ten feet in the air, I remember looking down and watching my father maintaining his balance… and juggling. I mean seriously, was he a circus clown in his past life? He would go back and forth, up and down the drive way. I remember people driving by. Some would honk their horns, but most would just do a double-take in disbelief.  We would do that for hours until either my dad’s shoulders gave in or I started to get nauseous.

Looking back I wondered how my dad could ever have gotten to the point where he could master something so bizarre and irregular. I mean, that’s something you probably wouldn’t put on your resume, but if you did… I guarantee it would at least start a conversation.

So a couple years ago I asked my dad, “Hey, how did you ever learn how to ride a unicycle and juggle at the same time.”

He responded, “Well son, it’s a little something called time and effort.”  He told me that I could not learn both skills at the same time. I’d have to master each one independently because both require their own individual muscle and brain training.

I thought to myself, “Oh that’s easy. I have done stuff like that before.” Well I found out for myself that he was not kidding. It took a lot of anytime and effort. I spent hours trying to find my balance on that unicycle. My dad was there giving me pointers and saying, “Keep your arms out… keep control of your momentum.” After many months later I finally felt good about it. I said to myself, “Alright, what is the next step? Oh yeah…juggling. I forgot I have to how to learn how to do that too.” So just like the unicycle I practiced and practice. My dad said it was all about hand-eye coordination and focus. Weeks went by and I finally started getting the hang of it. I got to the point where I could juggle almost anything: balls, fruit, even forks and spoons. I told myself I was ready to put the two together. Boy was I in for it.

I remember getting on the unicycle with three lemons in my hands and starting off down the driveway. As soon as I threw that first lemon in the air, things went crazy. I started spinning out of control, dropped all of the fruit, and crashed landed in my mother’s flower bed… it hurt. A little disgruntled, I got up and tried again, and again, and again. Each time landing on my back or my face.

Needless to say I was frustrated. So I asked my dad, “What’s the deal?” He told me to not get frustrated. He told me to be thankful for what I had already learned, and to remember that it was just a few months ago that I could not ride a unicycle or juggle to save my life. He said that it would require more time and effort. I will be honest, I almost quit. But wait…

The True Value of Time and Effort

Learning how to juggle seemed easy to me now. Riding a unicycle had become just like riding a bike. I almost forgot how much time I had put into learning these skills. I eventually decided that no matter how hard or how long it took I was going to master the art of juggling while riding a unicycle. So I kept practicing, spending time everyday getting closer to my goal. And now, I am proud to say with absolute certainty… if you have a few cylindrical objects or pieces of fruit, and unicycle handy, I’ll give you something to laugh about. Being young, you don’t realize how much time it takes to accomplish things. From the perspective of the young boy on top of my father’s shoulders, it could have been the first time my dad ever touched a unicycle and I would not have known any different. As a young adult, I understand that anything worth doing is worth 110% of your effort. Even if it is something as silly as riding a one wheeled bike, it takes dedication and commitment. That is a life lesson that I can honestly say I inherited from my father. Remember: Good things don’t come easy. They take time and effort. Props to you dad. 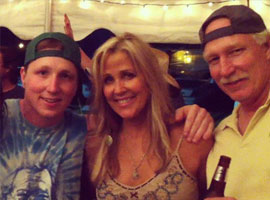