Something happened to me in my life, although it now feels like a dream.  It was a fall day, around noon.  It was no Indian summer either (pardon the racism.)  This was like the mid-50’s where an over-portly person like myself can be seen putting on a long-sleeve plaid flannel, leaving it on for about five minutes, then taking it off because I get all sweaty.

But today I wasn’t wearing flannel like some schmuck.  I had rented a hand-me-down tux from a place by my house called Play-it-Again-Tux.  I walked along the red brick path between the sprawling green yards.  Whoever cut the grass was a pro because he had cut the grass in the outward swirl pattern that I was certain to be impossible with today’s technology.  At least it looked that way from the brick path.  The trees all along the church and far off in the distance were all that fall color that’s really impossible to describe, but I’ll give it the best try I can:  RED AND BROWNISH AND UHH YELLOWY GOLD but in a beautiful way.

The church was old and limestone and glorious.  The stained glass windows showed some religious lady’s interpretation of how the 12 steps of the AA are supposed to go.  I dipped my hand in the holy water and made the sign of the cross, but I kept screwing it up.

“Look at Nips McGee over there,” I heard a man mutter to his kids. Next to me was a woman my age scooping up holy water out of the other basin. She then poured the holy water over her head and scrubbing it all around in her hair.  It made me think of an old Garnier Fructis commercial… or just a woman shampooing in the shower, particularly that woman.  And yeah, I could totally see her nips through her sopping white shirt.

The lady in front of me yelled up to the priest at the front of the church, “Father, can we get this thing started?  The guy behind me’s a real boner.”  Everyone in the congregation turned around and looked at me.  It was like that feeling you get when hundreds of people are craning their heads trying to get a view of your pitched tent.  That specific feeling.

“My apologies,” I said.  I abruptly bent over and pretended to tie my shoes while forcing nonsexual thoughts into my head: garbage disposal, sandpaper, the guy with the big hideous head from the movie about that guy, and so on…

I stood up flaccidly and looked to the front of church.

“We are gathered here today,” began the priest in his booming voice.  “Ah, who gives a shit. It’s hot in here.  I now pronounce you Chuck and Larry.  You may kiss the Larry.”

Chuck grabbed Larry tightly and gave him a big beardy smoochie. You couldn’t tell where one beard began and the other one ended.  I shivered thinking of them sitting at breakfast trying to eat biscuits and gravy.  It’s just they would get so much gravy in their beards.  The congregation applauded and made their way toward the exits.

The reception was in a reception hall down the street from the church, cleverly named Marvin Harrison Hall.  I followed the crowd past the spice gardens, which sent wafts of cumin, cinnamon, lemon grass, gamboge, and the necessary evil fenugreek floating into our nostrils.  The scents were breathed deep and were so pungent it made me really hungry for a … well, anything.  I spotted my old Mexican coworker picking a blade of lemon grass and munching on it.

“Paisanoooo!” he said.  “Did you see those beards in there?”  I tried to think of a good beard joke, but none came to mind. We walked to the bar in Harrison Hall while reminiscing of the old crew at the golf course, mostly illegal Mexicans.  We both ordered Tecate.  The bartender asked to see our IDs.  Julio had a fake ID that read Will Williams.  The bartender, who looked like a white Kevin Hart, looked up at us with a face full of scorn-on-the-cob.

“Hold on a second, please,” the bartender ordered.  He muttered something into a walkie-talkie.  Julio looked kind of nervous.  He was about to make a break for it when the bartender looked the other way.  The bartender kept his eyes on Julio with that aforementioned scorn-on-the-cob glare.  Then Chuck and his father-in-law arrived at the bar.

“This man has duped you all,” Ralph the bartender said.  “He is an alien.  An illegal alien.”

Chuck turned to me and said, “Constance, why did you bring this alien to my wedding?  Why!?”

I looked from Ralph, to Julio, to Larry’s dad, and finally to my good friend Chuck.  Think, Constance, think on your toes, I thought.  Julio’s life may depend on it.

All of the hundreds of heads turned towards us at the bar.  Uncomfortable silence was the main topic of conversation.  Then it started.  Chuck’s mouth twitched then crept into a wide smile underneath the great beard and God knows what else is under that face rug.

“HO! Uh HO HAHA-HEE-HEE-HEE,” Chuck roared as he flung his head back in uncontrollable laughter.  Then Larry’s father emitted a smattering of “hee-hee’s” and “ptttt-toot’s.”  He has an incurable flatulence disease that, well… I won’t get into that right now.  Needless to say, the laughter spread like legs of a village bicycle on Memorial Day.  And it was raucously bouncing off the walls.

Relieved, Will- I mean Julio wiped his brow and took a hearty swig of Tecate.

“What is this, the world premiere of K-Pax?  Because being an alien is awesome!” I said before I took a swig of Tecate.

That was the gayest wedding I had ever been to. 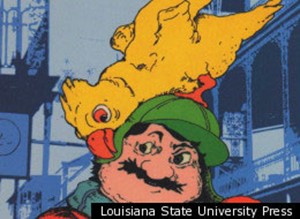 Constance O' Claretty
Some physical things,
I do admire,
So when I give props,
They all are cyber.