There is one week out of the whole year that is highly anticipated by every Indiana University student. A week that totally, but temporarily, changes the vibe in Bloomington. A week that puts so much butterflies in the stomachs of every nearby college student, that you would think it took the cardinal’s place as the state bird. We all know what week this is; FINALS WEEK…….. No I’m joking, Little 500 of course. So I would like to give my first ever Cyber Props to the week that, in my opinion, even trumps Spring Break. I believe that you cannot give proper Props without first going over the history of something, so this is how Little 500 (A.K.A. Lil 5) came to be. Lil 5 was an idea hatched by former IU Foundation President, Howdy Wilcox in 1950, as a way to raise scholarship money for working students and to increase the support of the IU Student Foundation. His idea was inspired by students living in Hickory Hall (which was apparently a residence hall back then) as they raced around the dorm all along while being cheered on by fellow students. The first race took place in 1951 at the Tenth Street Stadium (where the arboretum entrance is now) where close to 7,000 people attended and $6,000 was raised. Now Lil 5 is the largest collegiate cycling race in the nation and draws more than 25,000 people each year.

Lil 5 is known as the greatest college weekend in the nation, and this may be true for the students who come here from other schools to join in on the festivities. In my opinion though, Lil 500 is the greatest college week in the nation and my opinion doesn’t come without support. The inhibitions of IU students are drastically lowered during this holiest of holy weeks, and instead of saying “Yolo” I find myself saying “It’s Lil 5”. This week is so important to students that even the professors comply with the students’ demands to skip class and get drunk. Many times I have experienced my teachers canceling class or not giving any homework that week, but still reminding us to “Enjoy your Lil 5, but BE SAFE”. For the “responsible” students (like myself), we safe up all of our unexcused absences for the classes that we know won’t be canceled. So, with the help of our gracious and understanding professors we are able to spend the whole week bonging beers, making slip-n-slides, throwing the football/Frisbee, and all the other activities that tie into dartying.

As the population of Bloomington practically doubles during the weekend of Lil 5, so does the amount of excise police. I wouldn’t fret too hard on the police this weekend because the main reason they are there is to prevent a riot from forming. As long as you are not walking on the streets with alcohol on your hand or straight up acting a fool in public then you will survive Lil 5 without a drinking ticket. This over population also draws the attention of many companies, and entices them to come market to the many drunk college students (props to 8 Days a Week Promotions for giving me $18/hour my freshman year). Many times these companies give out free products and samples, so a day at the race will be filled with free goodies and good times. Although most people don’t come to Bloomington to watch the race, there still is always a large attendance on Saturday. I personally enjoy the race and appreciate its tradition and cause, but for those who think that the race is boring or overrated; what makes it better are the raging fraternity fans, the free stuff handed out, the beautiful weather which always seems to roll around during Lil 5 (props to God), the not so modestly dressed girls, and the possibility that there will be a huge crash during the race (admit it, we all secretly hope for it). Each year there is also a huge concert that always stars big name artists like Lil Wayne, Big Sean, Schoolboy Q, and Macklemore who have came in the recent years. Don’t have enough money or just don’t want to go to the race or the concert? That’s fine, just walk around the outskirts of campus and you will be sure to find a house party or simply people dartying on the street possibly playing some corn hole (I hate you if you call it bags). It’s weird, but all the IU residence are very nice and inviting during Lil 5, so don’t be afraid to ask if you can party with them (especially if you’re a girl) because everyone’s just trying to have a memorable Lil 5 right? My greatest experience was going to my friend’s house next to the stadium and at his party he had a bouncy house, but I will let your imagination fill in the rest (Props to Nate Penley).

Little 500 is so inspiring that it also has a movie based off of it called “Breaking Away” that won academy awards and was nominated for multiple golden globes. Celebrities are often seen attending the race, and some of the ones that came in previous years were Barack Obama, Mark Cuban, and Lance Armstrong. It is clearly evident that Lil 5 has touched many people’s lives and has changed this world, or at least Bloomington, for the better. I am sure that Lil 5 will have an effect on you too, so make sure you experience this wonderful event in person, because you might just have the “best week” of your life. 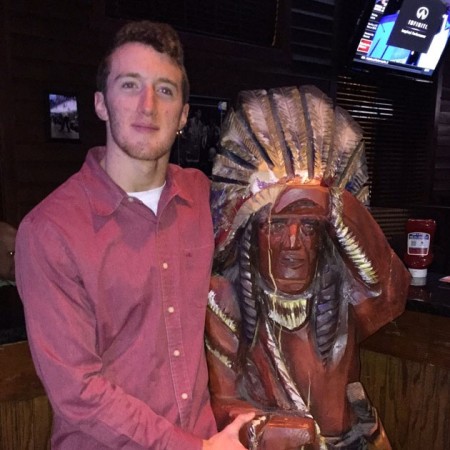 Evan Guedel
IU Hoosier and New Palestine graduate.Living life through the lenses of my Gopro.