Everyone has a favorite superhero. Batman, Superman, The Flash- you get the point. The term “superhero” was created to describe characters straight from comic books and television series who did incredible, jaw-dropping things. Things that we wish we could emulate. The problem with these “superheroes?” They weren’t real. I, too, have always wanted to be like my heroes, but I didn’t crave the speed of The Flash or the strength of Superman. I wanted to be a different type of superhero. A real one. I wanted to be a soldier in the United States military.

Ever since I was little, I wanted to be like the brave men and women of our armed forces. I wished that one day I would be half the person that they are and that I could do something great with my life. Truth is, our military doesn’t get the recognition that it deserves. That’s because there isn’t anything that can be done or said to properly recognize our soldiers for the sacrifices that they make. While we get to spend our nights in our beds, and we get to eat home-cooked meals for dinner, there are people across the globe going without food and sleep to make sure we live our lives as we wish. It takes a true superhero to knowingly stand in the face of danger to defend the lives of others. To be away from their families on Christmas. To miss the births of their children or the weddings of friends. All for us. The people of the United States. My favorite superheroes growing up weren’t characters out of the comic books or the fictional figures out of movies, but instead those men and women who were out on patrols in boots and camouflage. I was fascinated by the stories of General George Patton, and eventually I grew to idolize the likes of Marcus Luttrell, Chris Kyle, and Howard Wasdin. While my friends spent their Halloweens dressed as Marvel’s finest, I rocked a replica Army uniform, complete with a helmet and boots. If I couldn’t be one of them, I would at least dress like it.

The men and women of our armed forces deserve every bit of respect and every bit of support possible. The selflessness, courage, commitment, and honor they put in deserves every bit of glory, recognition, and praise imaginable. The next time you bash the military or what they do, remember who is fighting for you to exercise your right of free speech. Because regardless, they’ll still be out there, doing their job. This past August, I enlisted in the Marine Corps. I want to make a difference. And hopefully, I can grow into the type of service member I have always looked up to. A real superhero. 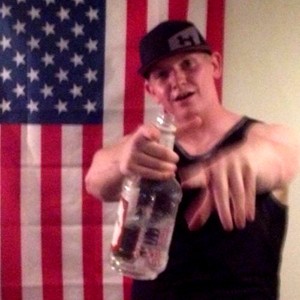