**DISCLAIMER: SO MANY FEELS**

We live in a generation of “the feels.” Urban dictionary definition #4: Something that is amazingly awesome or connects to the senses in a wonderful way. An old song, movie, smell, or taste gives you that blast-from-the-past feeling we all yearn for. Twenty first century technology allows for these “feels” to be easily accessible. Headlines such as the ones below fill my social media feed on the daily:

As we scroll down the page of nostalgic moments, memories flood our cranium and we soon find ourselves grinning from ear to ear reminiscing of “the good times.” Social mediaites unite and petition with hashtags and Facebook shares to bring back their favorite childhood products.

Corporations are “caving in” and capitalizing using the phrase Back By Popular Demand more than ever before. General Mills reboots French Toast Crunch and it temporarily breaks the Internet.

Mars’ Crispy M&Ms and Coca Cola’s Surge flew off the shelves. Burger King’s Chicken Fries are just as delicious as when I was a teenager. Drive on over to your local theater [or browse (re)bootleg sites] and it exudes rebootyliciousness. Trailers for Ah-nold’s Terminator Genesys and Ghostbusters sans Bill Murray are watched before Poltergeist, Mad Max: Fury Road, and Jurassic World.

We’re always begging for TV shows’ reunions – Friends, The OC, and Dawson’s Creek for me.
I just wanna see Marissa and Ryan together one. last. time.

Netflix took the term reunion to a whole new level rebooting the 90’s classic Full House with (almost) the same cast. Olsons, you are not twinning. Magic School Bus and Inspector Gadget are also coming back from the graveyard of cancelled 90’s shows thanks to everyone’s favorite streaming website. Oh, yeah, and you know the Twin Peaks that exists at the corner of 82nd and the i-465 exit, well, a show of it’s same name is being dug up from the 80’s by Showtime.

What’s next (and rumored) in the coming years of Rebootyliciousness?

If you’re feeling “feels-y” check out the links below:

Now, let’s get a #BringBackAlexMack started. 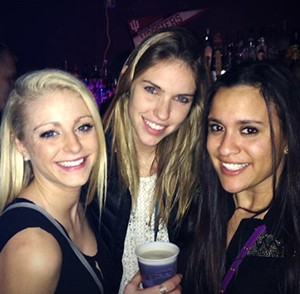 A Legacy of Solace
March 22, 2015
Recent Posts
Submit Your Own Props
Learn about becoming a guest blogger. No writing experience necessary. Everyone has something to be grateful for.
Categories
Go to Top
CyberProps